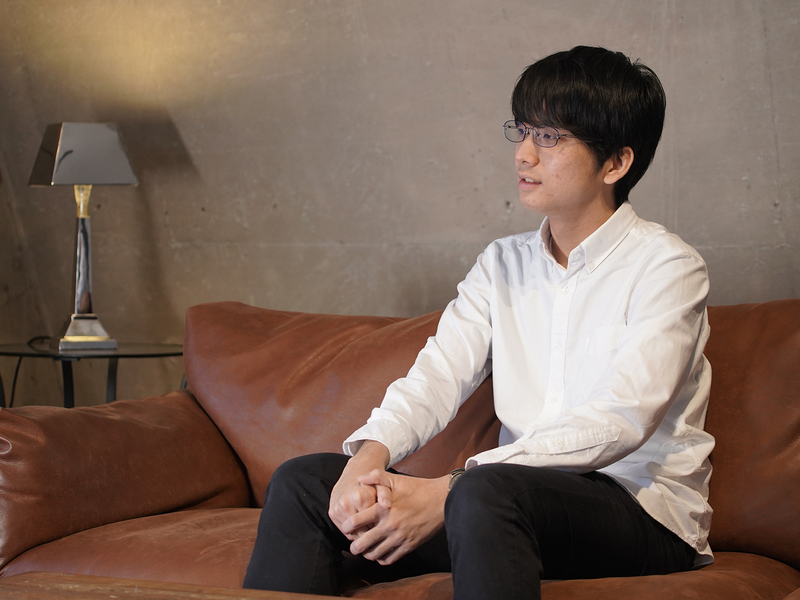 VFX; inheriting the legacy of SFX from Japanese movies

At 19 years old, Tomoyuki Miyake is fascinated by Tokusatsu, a Japanese movie genre with high amounts of special effects, including Godzilla and Gamera and has been pursuing CG and VFX techno

This young man is fascinated by the worldview of videos created using VFX (visual effects). As a sophomore in high school, he became the youngest challenger in the INNO-vation program (2016) and he had already begun making his own VFX content.

Three years later, in Spring 2020, the previously called "VFX boy genius" is entering University. As Miyake has grown from a precocious boy into a young man, the question is “What kind of visual world is he pioneering now?” After touching on his works to date, we asked about his processes so far and what’s next for him.

He says, “It all started with the movie ’Always: Sunset on Third Street 3,’ (directed by Takashi Yamazaki). I was impressed by the images of the Showa era (1926-1989 in Japan) cityscape they reproduced. I was too young then to even know the word ‘VFX’. In third grade, my folks bought me the DVD which included behind-the-scenes footage. The director, Yamazaki, explained that VFX is a combination of technologies incorporating real photos, CG, and 3D models. That’s how I first learned about VFX.”

Miyake has loved creating ever since kindergarten. At the time, he was too young to take advantage of technology with CG or video production. Instead, he felt SFX with miniature models was within the realm of possibility. “Sensibility is an extension of creation.” He adds that he was constantly “making models of Showa-like buildings and then using a low-end digital camera to shoot and make composites, which made it more interesting.”

The young SFX enthusiast started tinkering with iMovie and Photoshop on a Mac at home. It wasn’t long before he had mastered them. He studied and soon became well-versed in techniques like chroma key composition of images shot with a green screen.

He says, “The next thing that had a big impact on me was a special exhibition that gave a comprehensive introduction to SFX technologies in Japan, ‘Director, Hideaki Anno's "TOKUSATSU" Special Effects Museum-Craftsmanship of Showa & Heisei Eras Seen Through Miniatures’ (held at the Museum of Contemporary Art Tokyo in 2012).” Hideaki Anno is best known across the world for the Japanese mecha anime series, Neon Genesis Evangelion. Miyake adds, “I was constantly going to the movies―Godzilla, Mothra, Gamera, Ultraman―and I especially adored ‘Giant God Warrior Appears in Tokyo,’ which was filmed as a special feature for the museum.”

In all, he ended up attending the feature more than 30 times. His interest in creating scenes of destruction and explosions really became focused when Miyake reached sixth grade. He has a natural tendency toward realistic SFX and self-made movies.

At the elementary school Miyake attended, a new and experimental course promoting self-study was implemented. Fascinated by building destruction, he used this as an opportunity to realize his SFX skills in a new, challenging way. Miyake took advantage of this new course, making SFX videos utilizing all his knowledge and techniques acquired until this point. He ultimately decided to follow the theme of school destruction.

This was the first SFX video Miyake had ever put out. Using 1,114 images made in photoshop, he constructed buildings out of craft paper. To this day, Miyake supplements his videos with ‘making-of’ specials, a testament to his dedication and commitment to pursuing new SFX techniques.

Upon entering junior high, Miyake expanded his horizons with studying CG software. Until this point, he had only dipped his feet into full CG production. Now, he had a new opportunity to study and produce with the open-source software Blender, learning from the internet and an assortment of books.

“There are lots of examples of ‘tutorials’ for CG,” he says. “But there was nothing anywhere for what I wanted to make, destroyed cities and buildings. When you work alone, you always hit a wall. I’d advance little by little and find workarounds but I’d hit that wall again and again.”

“To make distinctive buildings like Japan’s parliament or the Tokyo Mode Gakuen Cocoon Tower, you first need reference material. So, I needed to collect my own, by browsing the internet and taking my own photography, and have side-by-side comparisons to find features to extract and incorporate. It felt like designing a painting. Packing in details in this way adds to the reality of the image from the original photos, and I realized it was the way to create realistic 3D CG.”

He wanted to discuss his ideas on bulletin boards about 3D CG or Blender, but he was still just a junior high school kid. He was told he’d “have to be at least in high school to participate on the internet” His self-taught CG improved and aPR video he created for the library committee was broadcast within his school.

In the 9th grade, he had an independent study class and this time he made a more accomplished VFX piece titled “2045." This piece is a 5-minute-long disaster video, where a singularity sees the collapse of the Rainbow Bridge, Skytree and the destruction of Shibuya, all famous locations within Tokyo. Overall, it took a year to produce.

“I did everything myself from scratch - the texturing, the modeling, etc., - to design buildings, cars, roads and other things around the city. I'd put in 6 or 7 hours a day but it never felt that long. As soon as I woke up in the morning, I’d reach my hand out for my computer,” he laughs. “It was all a blast.”

Miyake presented ‘2045’ to his school’s work exhibition and uploaded it to YouTube after he finished taking his high school entrance examinations.

The reaction on the Internet was massive. More than anything, comments expressed surprise at the quality, like “You've got to be kidding, a junior high kid did that!?” Then a surprising notice arrived from someone who had seen “2045” on the internet:“You have been nominated for the INNO-vation program and have passed the initial screening.”Miyake and his family initially thought it was just spam.

Between his private university-affiliated high school and being a challenger of the INNO-vation program, Miyake’s life at school was extremely busy. He was a member of 3 clubs―the film club, theater club, and the art club. The diversity of activities gave him a much broader scope, with an understanding of the art form of acting as well as storyboard, prop, and set creation. Of course, he continued to make VFX videos with the film club, and through INNO-vation he was able to explore other technical matters, namely “pursuing realism in building demolition videos using CG and releasing the production processes and modeling data from doing so.”

Miyake says, “As I entered high school, I was hoping to make friends that I could make videos with. That’s how it actually ended up, but I realized that most people wanted to only watch movies, not shoot them. However, if you taught them how to make movies, people really got into it. I came to think there aren’t enough people who want to produce movies.”

Miyake continued on his quest. In his 2nd year of high school, he created a short movie to help recruit new members as well as producing“Purchasing War”, his entry to the TV program “Video Koshien―High School Student Video Contest.”

In the latter half of the year, he started putting together his graduation thesis. With his high school being associated with a University, entrance examinations were not necessary. Instead, Miyake was required to produce a graduation thesis .. He decided on the theme of his thesis: “VFX Fighting Spirit Theory―an Individual-driven Video Revolution.”

“Considering how videos were made up to that point, I thought that using VFX technology was something that could be done without any special know-how. It had become commonplace to see individual YouTubers produce videos with VFX, so people had sort of gotten used to it. But even on YouTube, the only people who were making those high-quality videos were professionals. Even now it’s hard to know for sure, but even though CG and VFX aren’t commonly used, I think if regular people just started giving these things a try, there would be a potential revolution in filmmaking.”

For his graduation thesis, Miyake wrote a script for the first time to produce the VFX movie “Real World Travel”. This time, he decided to shoulder every facet of production. He created small props for the actors, designed sets in CAD and even made original music with loops. Being involved in so many things, there wasn’t enough time to shoot the whole script, but the trailer was done in time for the graduation thesis report committee.

Miyake’s achievements during his high-school days included thought-provoking efforts with CG-related technologies. He wanted to lower the technical hurdles for others by sharing his knowledge and experience. Miyake wrote an article on note.com (Japanese only) in which he explains in thorough detail his knowledge of HDRI (High Dynamic Range Imaging) technology, which is used in 3DCG.

“Japan had some amazing technologies called SFX,” he says. “At the outset of the CG era, Japan had a few elites creating videos while overseas waves of people were working together to create CG. I think there are ups and downs that go with both of these approaches. But nowadays, I'm afraid the number of creators is going to drop drastically. The structure of movies seem to have developed in a way so that companies can enhance their CG with capital, while individual makers need to rely on their determination. Since CG has become indispensable to movies, if we can create a structure with both capital and willpower for CG, I don't see why Japan couldn’t create interesting visual expressions as well. There’s a famous phrase from a popular comic in Japan: ‘Soccer?” Let’s do it!’ Being that there are a lot of gutsy people in Japan, I hope we can take that same approach: ‘CG? Let’s do it!’

Miyake's theory stems from the fact that the "founder of SFX," Georges Méliès (A Trip to the Moon director), made his movies by himself. It's said to be a result of his hard work and dedication to the craft.

19-year old Miyake makes the case that interesting expressions can take the world by surprise by using CG and putting in some serious determination. As Miyake becomes a college student, we hope he attracts the support of people from around the world, not just from Japan.

Tomoyuki Miyake
Miyake was born in Tokyo in 2000 and has entered the Department of Composite Culture, Faculty of Education, Waseda University. The VFX film "2045," which was released in his third year of junior high school, has been viewed over 1.5 million times.