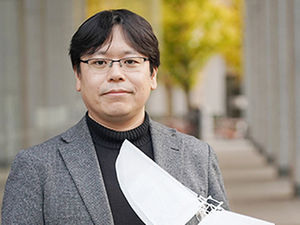 Takanobu Watanabe (Waseda University, Professor in the Faculty of Science and Engineering) envisions a future of multi-point environmental sensing on a global scale

Mr. Watanabe is researching and developing a flying robot with flapping wings.

When the device begins flapping its four white wings (two pairs each on its right and left sides), it lifts off smoothly. Its wings move more swiftly as it rises, and it moves about smoothly as it flies laterally. It even seems strangely cute as it hovers with its wings vibrating in midair.

“It’s not a bird or a bug, but I want people to see a lot of this kind of robot flying around. I didn’t make it in time for the Tokyo 2020 Olympics but I want to realize that vision by the World Expo 2025, in Osaka.”

His flying robot, the “WiFly (Waseda Intelligent Fly)” has now evolved toward the “WiFly2” model; with four wings, two motors, and automatic mechanical engineering controls on flight elevation and attitude. His efforts toward entirely independent flight are still in progress.

This sort of “ornithopter” flight via wing flapping was originally designed during the time of Leonardo da Vinci, the actual robot units and structures are not terribly unusual. They have as many fans as paper airplanes do, being popular enough that there are even occasional workshops for children interested in the devices.

A key characteristic of the flying robot in Watanabe Lab is that it can move from horizontal flapping to hovering vertically.

The unique aspect of this project relates to Watanabe’s reason for focusing on flapping wings. The research lab he supervises is specialized in semiconductor engineering and specifically substrate research, such as silicon properties and surface processing.

“It’s quite distant from my main research. People often ask, ‘why this?’ (Laughter). Of course, I’m not doing this as a hobby,” Watanabe explains.

Watanabe began looking into flying robot ideas in 2008. At the time, the Japanese semiconductor industry had begun to flow overseas, with dead ends coming into view in terms of both technical progress and production scale.

“The semiconductor market is made up of mass production and mass consumption. When thinking about where sustained mass consumption markets might arise for the industry, I felt that there was potential in terms of distributed sensors,” Watanabe states.

The problem with distributed sensors is their power supply. Would it be possible to make a system where multiple sensors moved on their own to gather data for “multi-point sensing” without battery limitations? For example, a system where “data bees” fly off to work, return to base to charge when low on energy, then fly off to gather more data.

Swarms of Robots in the Sky

“I wanted to be involved in a long-term project on applications that would be impossible without AI control. If I could develop small aircrafts like insects or birds and mount sensors, memory, and LSIs on them, I could launch thousands or tens of thousands for tight sensing densities. They would also be somewhat disposable, since they flew outside, which would generate massive new demand for semiconductors.”

A swarm of thousands upon thousands of flying robots, soaring over mountains and fields or skimming through gaps between buildings. Having envisioned the future of “swarm intelligence” 10 years in advance, the Watanabe Lab took up the challenge.

The flying object as viewed from the front.

At first, no one knew anything about ‘ornithopter flight.’ We wanted to make devices like dragonflies. However, dragonflies twist their wings to fly. It's not just flapping it’s wings; trying to reproduce such a complicated mechanism simply does not work because of the weight increase.”

Drones (quad-copters, at the time) also began to enter the market. He considered applying existing drones but drones lack the ability to glide. They keep propellers in constant rotation, giving ornithopters the edge in battery life and travel distance, as expected.

They spent five years engaged in a process of trial and error. There were countless issues to consider and address, from drive motors to feedback control; vertical takeoff and landing; lateral flight mechanisms (the internally-developed “center of gravity movement mechanism” achieved later); and more. However, they did not make significant progress on the overall completion of the core craft.

The turning point came in 2016, when they gained cooperation for joint work with Toshitatsu Munakata, a renowned expert researcher in the field, known for the “Micro-Aircraft Research Lab.”

“Munakata advised us to ‘make it lighter, all else aside.’ He also provided us with gearboxes to tune the motor torque and cranks to move the wings. We also achieved our original technology, the ‘center of gravity movement mechanism’ at that time. The first ‘WiFly’ was born,” Watanabe explains.

The research moved forward after getting the flapping mechanism provided.

Through TV shows and other venues, they gradually found increasing chances to showcase the “WiFly” in flight. Having created a flying robot using a new mode of flight, their next step was applying artificial intelligence.

“Through reinforced learning which grants a reward for a certain elevation and applies a penalty for leaving those bounds, the devices use machine learning to automatically adjust elevation. We use the motors as weights for adjusting attitude in flight, and use reinforced learning to maintain attitude. Since the optimal value changes from setting to setting, we plan to increase the number of layers and use deeper learning in the future,” says Watanabe.

Completely independent flight is the ultimate goal. The devices will eventually be able to fly in a swarm through a forest, smoothly navigating the trees and avoiding one another. By that point, the device designs themselves might even be made by AI, exceeding anything humans can imagine…

Even now, the “WiFly2” weighs just 30 grams. Since it features two motors to flap its wings, despite its low weight, it also has six grams of payload (carrying weight) to spare. Someday soon, the devices will be mounted with micro-cameras and tested with SLAM environmental mapping techniques.

Watanabe went on to explain the rest of his vision.

“Everyone occasionally gets stuck in traffic jams and wants to see what's ahead of them, right? And wouldn’t it be great to have an aerial view for open spaces when you pull into a highway rest area? It would be great if your car’s roof would just pop open and let out a flying robot to look for you.”

There are also calls from farmers and golf course owners for flying robots to repel damaging monkeys and boars, he tells us. Also, the devices would be useful in assessing the damage from landslides, typhoons, and other major disasters such as earthquakes. Since ornithopter crafts are more resistant to air currents than drones, they are also likely to be more useful.

“They might also be useful for advance prediction. Take earthquakes, for example. There are always ‘warning signs’ before a major earthquake, but we have only noisy data with a small sample set for any of them. However, with thousands or millions of observations, or with global-scale multi-point sensing, we might recognize something humans haven’t been able to observe yet,” Watanabe tells us.

Watanabe sees a future where “data bees” alight on our verandas and lawns like birds and bees do now, only to suck up environmental data.