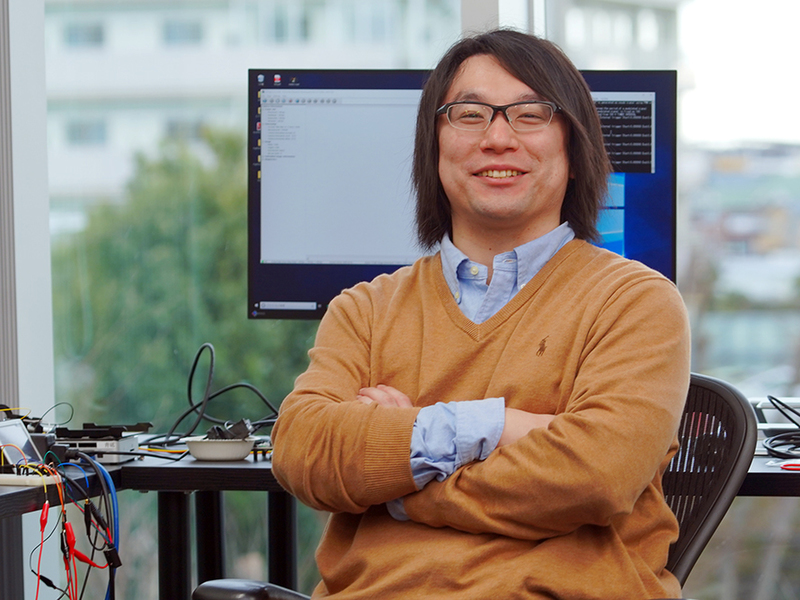 Dr. Takahito Aoto (University of Tsukuba) is working to develop a device that can measure the exact softness of materials without actually touching them

Is it gelatinous or doughy or simply limp…? The only way to determine the softness (and elasticity) of an object is by touching it and feeling for yourself. However, Dr. Aoto is currently engaged in research on a special kind of camera—a camera that “captures softness.” Since it accomplishes this simply by filming objects, the camera is, of course, non-contact, non-destructive, and non-invasive. It can determine how springy an object is based solely on the visual data that it collects.

This camera can also measure the viscosity (and stickiness) of an object, in the same way, determining whether an object is spongy, gummy, or outright sticky.

The camera utilizes both ultrasound waves and light rays to film objects. More specifically, it uses an ultrasound array to apply pressure and vibration to an object, causing the target object to shiver and shake. Next, by shining a light on the object and filming it in this state, it can capture light ray dispersion data that is unique to (and can, therefore, be used to identify) various physical properties. A computer then analyzes this data to estimate the elasticity and viscosity of the target object.

“The principle behind it is actually quite simple. In fact, something similar happens inside of our ears. For example, you know how you can hear the difference between hot water and cold water when they are poured? This is because they produce a slightly different sound. When the temperature of water changes, its viscosity changes as well. Even though we cannot sense this change visually, we can detect it through our sense of hearing.”

What this camera aims to do is surpass these kinds of “arbitrary” sensations, which rely on our intuition and experience, to provide actual, accurate measurements. Dr. Aoto showed us a video of water in a petri dish being subjected to ultrasound waves with gradual variations in ultrasonic output. “Here! Can you see the distortion in the light coming out of here? When the water vibrates under the effects of weak ultrasonic waves, there are changes that the human eye cannot discern. However, if we amplify and analyze this data, we begin to understand the characteristics of the object.” Indeed, it was just as Dr. Aoto said.

“The ultrasound array takes advantage of a technique called ‘ultrasonic tactile feedback,’ which allows one to sense the ‘feeling of an object’ without actually touching it. Here, this technique is used to apply vibration to an object without actually making physical contact.”

“In the world of industry, you would be surprised at just how often manufacturers rely on human know-how to ensure product quality. Often, the quality control process involves an actual person visually examining and physically touching a product to get a general sense of its characteristics before making adjustments to production processes. This process is then repeated over and over until they get it right. In many cases, manufacturers are simply not able to quantify quality exactly, which means that these processes cannot be automated.”

One example of this is “hydraulic printing,” which uses pressurized water to transfer a pattern or image from film onto various types of material. This technique is widely used for everything from accessories (such as smartphone cases) to vehicle interior panels. However, when it comes to checking the water absorbency of the film or pattern transfer times, everything is dependent on skilled workers. Manufacturers have a great need to be able to accurately detect state changes throughout the production line—from the drying of printing ink to the hardening of adhesives to finding just the right interval between coating applications, etc.

This device transforms the visual know-how that skilled workers accumulate through repeated observations into hard data. So, for example, even unskilled workers could use this device to perform product inspections in factories and so forth—the practical applications are innumerable.

“In fact, it is no easy task to verify the expertise of a human worker. With this camera, I hope to create a device that turns this knowledge into hard, quantifiable data so that anyone can use it to see what only seasoned workers can discern.”

Dr. Aoto is also working on the development of a device that can perform two-dimensional softness measurements instead of just single-point measurements. Although the most practical applications for such a device would obviously be within the field of manufacturing, it could also potentially be used to determine the softness of foodstuffs in the household. It would sure be convenient if we had an easy way to tell when fish are just right for eating or when peaches, melons, avocados, or other fresh fruits and vegetables are fully ripe.

The field of computational photography has already brought several innovative new products to market, including light field cameras, which can alter the focus or depth of field of an image after a photograph is taken, time-of-flight (TOF) cameras, which can measure distances and are therefore used for autonomous driving as well as a variety of other applications and cameras for VR photography. No longer devices that simply capture what we can see with our own eyes, cameras are turning conventional wisdom on its head while expanding the very idea of what a camera can be.

Functional imaging includes the “camera that captures softness” described above, which is quite unique in and of itself. At the same time, the very idea of a “camera that observes material properties” is also wholly unique even within this field. For this technology, Dr. Aoto utilizes a TOF camera. As its name suggests, a TOF camera measures distance based on the reflection (or “flight”) time of light rays. However, there exists some variance between actual distance and the distance measurements produced by a TOF camera. Generally speaking, the idea is to try to eliminate this variance in order to improve the performance of TOF cameras. In contrast, Dr. Aoto actually takes advantage of this variance to understand material properties.

The variance is caused by the scattering of light rays reflected off the surface of an object. By analyzing how light scatters when reflected off the surface of an object, one can determine an object’s material properties without actually touching it. Dr. Aoto showed us his experimental data, which showed that the degree of distortion between actual distance and measured distance did indeed clearly vary depending on the material properties of the object being observed.

Toward Capturing the Global Market for Industrial Applications

In addition to the above, Dr. Aoto is also working on all sorts of other research projects, including a “camera that can observe what is normally invisible” by utilizing slice photography to capture the interior of objects in sections, a “camera that captures only the scattering of light rays” and so on. The reason why Dr. Aoto is so quick to turn new ideas into research projects one after another is that he aims to bring as many of these ideas to fruition, in the service of society, as possible. If an idea seems feasible and worth doing, Dr. Aoto hopes to turn it into a product as swiftly as possible.

“I also run my own company (Top Tech Innovation). At the university, I research novel ideas and new advancements in the hope of showing the world ‘what can be done.’ Once I have shown society that these new technologies are actually useful, I want to move forward with full social implementation (i.e. outfitting society with these new technologies). I have found that there is a huge gap between research and actual social implementation. It seems that, even though a lot of great new technologies are being developed in research labs, many of these technologies face an uphill battle when it comes to catching on among society at large. So, when I invent a new technology at my research lab, I have my company buy the patent from the university (which automatically owns the rights to everything invented there) so that I can then develop and spread the technology as far as possible.”

Dr. Aoto also hopes to prove that this is a viable way for researchers to monetize the fruits of their research.

“Layering 3D printers, nanopore DNA sequencers, and even TOF cameras—all of these technologies were originally created in Japan. Nevertheless, they were all industrialized and commercialized overseas. It used to be the case that Japan would be the first to adopt foreign technologies and bring them to market. Nowadays, Japan has become extremely slow when it comes to the implementation of new innovation. In overseas companies, the people with the authority to make decisions will decide things right away, but things simply do not work that way in Japanese companies. In fact, my company is looking to commercialize our technologies to America at first. And we have also been in touch with companies in China.”

One does not often see a device that can measure the elasticity and viscosity of an object without touching it. On this account, Dr. Aoto says, “I want to capitalize on the entire market, even if it’s only a niche market.”

Takahito Aoto
Aoto is currently an assistant professor at University of Tsukuba and CEO of Optech Innovation LLC, Japan since 2018. He was a researcher at Nara Institute of Science and Technology (NAIST), Japan in 2016. He was a researcher at National Institute of Informatics (NII), Japan in 2017. He received M.S and Ph. D. degrees in Engineering from NAIST in 2012 and 2015. His research interests include applied optics and computational photography, computational field, and computational fabrication.