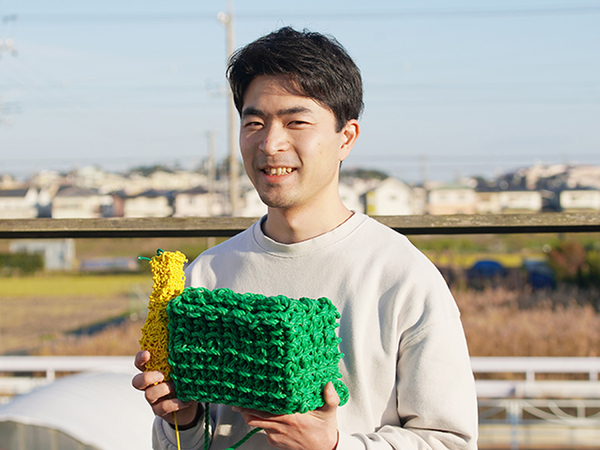 The day when 3D knitting machines will surpass 3D printers

Yuichi Hirose, a freelance engineer, bets his life on development of the 3D solid knitting machine

Our view is unobstructed by buildings— large open skies above, homes and farms nearby, and fallow fields filled with ragweed stretch out in all directions. As the name suggests, FabLab Hamamatsu, situated in the outskirts of Hamamatsu City, is a fabulous space created through a DIY renovation of a warehouse formerly used for housing farming equipment.

It is here that Hirose is developing his solid knitting machine, the world’s one and only 3D knitting machine. Hirose, originally from Tokyo, had previously been working as a mechanical engineer for a company in Hamamatsu. However, he made a bold decision to quit his job at the company and dedicate himself to the development of his knitting machine.

A New Way to Construct with 3D Data

When you think of machines which use 3D data to output fabricated physical items, you naturally think of 3D printers. In these machines, melted filaments of materials are either squeezed and formed into shapes or laminated as multiple thin and flat layers.

Articles knitted from a single thread are finished by simply tying a knot at the end, but they can be quickly unraveled and returned to a single thread by untying the knot and tugging. You can unfold a sweater, knit it into a scarf, and change it into a new design by adding yarn.

"When you take knitted items that are essentially digital in nature, you can undo any actions you aren’t happy with, exactly like pressing "Ctrl+Z" to undo in software. You can even update the design to change its functionality."

Wow! So, knitted items made using long threads (completely analog-like) are actually digital! Hirose’s spark of inspiration came seven or eight years ago when he was a student at the Hiroya Tanaka Laboratory in the Faculty of Environment and Information Studies at Keio University (SFC). The Tanaka Laboratory performs research into digital fabrication technologies. It was when he was surrounded by various digital machine tools and when looking into fab technologies that Hirose began to think, "Could it be possible to somehow take advantage of the digital nature of knitting?"

While in the second year of his master’s degree, he devised his completely original "solid knitting" design.

The solid knitting machine produces solid three-dimensional knits. Ordinary knitting can create items that are three-dimensional,but as the object is not filled, it is only the exterior, it can only create soft and fluffy items. Hirose speculated, "Wouldn’t it be possible to create solid three-dimensional pieces by stacking multiple surfaces together?" Applying the technique used for knitting, the stockinette stitch, he was able to produce a solid garment using 3D.

"By making the thread thinner, when the resolution increases, it should be possible to use it for parts and components. For example, most T-shirts across the world are knitted with fine thread without feeling like it is knitted. In the same way, I wanted to create a knitted item that looked solid, like plastic, but could be unraveled, updated and changed into a different form in the future."

When you switch to an iPhone X, you can no longer use the cover for the iPhone 8. Wouldn't it be great if it could be taken apart and reformed? When there's a new member of the family, wouldn't it be great if you could increase the number of seats on your sofa or maybe change the shape of your dining table? It seems as though there are lots of potential applications waiting for this technology in everyday life. Hirose posits, "In the event of an extreme shortage of resources such as on a space station; how great would it be if we could do things such as dismantling existing parts and create new ones?"

By 2013, he was at a stage where he was using hand knitting techniques (solid knitting) and converting 3D data into knitting patterns using computer software. "My ultimate goal is to realize a technology in which finished items could be updated at a later date. In order to achieve that, it would first be necessary to automate the knitting and unraveling processes". Hirose was building a machine from the beginning but just did not have the time or skills to make it a reality.

Soon after, he started working as a mechanical engineer for Roland DG, a manufacturer of 3D machining devices headquartered in Hamamatsu City. It was an ideal environment for Hirose, but he still had a burning desire to work on his own project.

In 2018, he left the company and began working in earnest on solid knitting.

"For solid knitting, you re-insert the thread into the first layer stitches from the opposite side to the previous stitch, then continues the stitches onto the next layer, repeating this process to build up the following layers. It is a method of knitting in which threads are 'forcibly' threaded through the stitching. With standard knitting machines, the knitted fabric can be left to hang down as-is, but with the solid knitting machine, the knitted fabric must be held in place. Also, as the knitting is done from the opposite side, it needs another pair of needles on the other side."

The needles he uses are "latch needles" typically found on normal knitting machines. The tips of the needles feature latches on the hook section which open and close. These latches open and close during stitching as the hooked thread is fed through and removed. The stitches can also be transferred to other needles.

“I struggled to come up with an idea for a mechanism to implement the automation of solid knitting. It was both difficult and fun”

"If you have advanced imaging recognition technology and robots that are able to move just as skilfully as human hands, then it should theoretically be possible to create machines easily capable of such work. However, it takes time to knit, as much as knitting by hand, and using it in other contexts could be very profitable."

By the end of 2018, things did not seem to be going well. In 2019, he started knitting manually with the aid of a machine. Hirose still had not gotten a functioning motor up and running. The 'winged holder', which controls the position of stitches by hooking claws on the knitted fabric, makes it easier for yarn to become entangled.

"Well, making adjustments by manually controlling the tension tends to work well. I use milling machines to try and create shuttle holders that will help ensure stable operation when the motor is running. This is something I do each and every day."

"I should be able to sort the motor out in the next couple of months," said Hirose.

Hirose thinks this represents the final phase where he can continue development on his own. From now, he intends to work alongside specialists from relevant fields.

First on the agenda: Chemical and Material Engineering. He aims to use finer quality yarn. Could there be any material in which elasticity and rigidity change when there are changes in temperature or chemicals? Hirose wants to knit three-dimensional objects with even greater precision and hardness.

He wants the help of expert mechanical engineers and investors in order to help turn his prototype into a high performance finished product. He is looking to add software to the machine which can support special knitting methods.

"Carnegie Mellon University's Textiles Lab has a team studying knitting. They are working on converting 3D data into a language that knitting machines can read and interpret, they are developing software that can knit 3D objects. When the machine is finished, I am thinking about creating a video that I can send out around the country."

More recently, he has been working alongside a designer on the creation of a product that can function with current resolutions (current thickness of yarn). One of his goals is to create a large scale production that can showcase the solid knitting machine using cranes and drones (a solid knitting machine that can continue knitting vertically without limits) . However, as a more practical goal, he is actively seeking out potential applications in the construction and medical fields.

Once the solo-development stage in his workshop in Hamamatsu ends, Hirose’s presentation will be distributed around different parts of the country.

"The reason I continue development of solid knitting is that I am desperate to reach that moment when I can finally say, 'Ah! This is the reason that I have put in all this work!' But as of yet, I am not quite there."

"I really hope that solid knitting will be able to bring a lot of joy to somebody and help them resolve complex issues in their lives and work. That is the type of scenario I dream about. Maybe solid knitting will never deliver on this front, but at least I'll never have to wonder ‘what if?’ in the way I would had I completed the project. I couldn’t bear to live with that sense of regret, and that is why I keep going."

Yuichi Hirose
He conducted research on digital fabrication at Hiroya Tanaka Labratory of Keio University. After finishing his master's degree there, he worked for Roland DG as a mechanical designer on 3D milling machines. Now he left the company and develops a 'solid knitting machine' which automates 'solid knitting,' a method he invented to knit dense objects from 3D data.