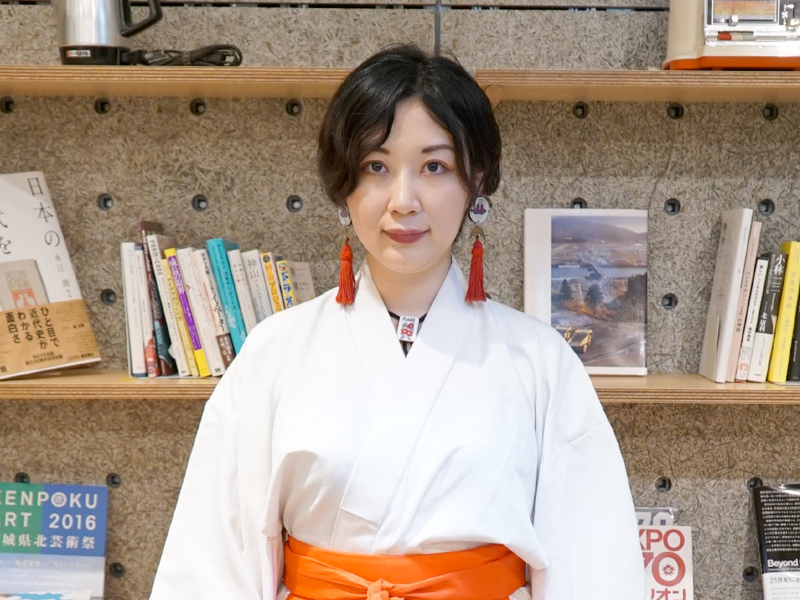 Use Technology to Highlight Japan-ness

In Japan, we currently have as many as 60 companies developing communication robots. From education to senior care, there are bots designed to fill communication gaps in just about anything we do. Now, this crowded market has a new bot created for a very unlikely purpose: a “digital shaman” who helps you mourn the deaths of your loved ones.

“I thought humanoids may grow in popularity for home use,” said Etsuko Ichihara, a Japanese media artist who developed the Digital Shaman, which won Generation Award 2016 in the INNOvation program, as we recently sat down with her to hear the story behind the innovation. “And it could become a common practice for people to give their robots personalities that represent their deceased loved ones.”

The “Digital Shaman,” which was developed under the INNOvation Award program, is a robotic application designed to assist people with Buddhism’s 49-day rituals.

Most funerals in Japan are conducted in accordance with Buddhist traditions. In Buddhism, every person is said to go through a 49-day transitional period after their death, during which a new life is assigned to them, based on their deeds in their previous life. For the loved ones left behind, it is important to pray during those 49 days for the deceased’s smooth rebirth journey into the next life. And the digital shaman is designed to help people do just that.

To create a digital shaman, Ichihara uses a humanoid (either Softbank’s “Pepper” or a French company, Aldebaran Robotics’ “Nao”) and makes it look, act and talk like a deceased person by feeding data specific to the individual -- certain gestures and remarks the person often made -- and fitting it with a face mask that’s been 3D-printed from a scanned image of the person’s face. All this data will be automatically erased at the end of the 49-day period.

Ichihara came up with the idea for the digital shaman in 2015 after losing her grandmother.

“Right after she passed, I couldn’t accept for a while the fact that death is unavoidable,” Ichihara said.

But, that would slowly change.

“I was impressed how the whole system of rituals, ranging from memorial services to cremation, is well designed to help people sort their emotions and overcome the sense of loss,” she said.

Back then, Ichihara worked at Yahoo! Japan, a leading Japanese tech company that operates under the umbrella of Softbank. Ichihara was part of the app development team for Pepper, a humanoid that Softbank had just released to the market.

“Humanoids have a much stronger presence than do other robotic devices, like smartphones,” Ichihara said about the reason why she suspected more people would adopt humanoids for home use -- and why she thought robots are fitting for the role of a shaman.

Ichihara makes it a point to dress as a “miko” when making a presentation about the digital shaman. A “miko” refers to a shaman in the Japanese religion of shinto. While the main responsibility of mikos in modern Japan is to officiate rites as shinto shrines’ employees, the Japanese still regard a miko as someone who connects the real world with the spiritual one. (Many Japanese customs are mixtures of Buddhism and shinto customs. While people conduct funerals in Buddhist style, some of them may also practice shinto traditions in remembering the deceased, just as some Christians may talk to a medium to connect with their deceased’s spirits).

Etsuko Ichihara is a media artist and “inventor who turns delusions into reality.” Born in Aichi prefecture in 1988, she has a bachelor’s degree from Waseda University’s School of Culture, Media and Society, where she majored in the Studies of Media, Body and Image. She left Yahoo! Japan in 2016 and has since worked as a freelancer. She is a member of a creative agency, QREATOR AGENT.

The digital shaman has Ichihara’s signature all over it in the sense that she’s known for her digital inventions that highlight and embody the essence of Japan-ness that she finds in the country’s cultural traditions.

To take advantage of the digital shaman and help others remember you after your death, you will need to record a lot of data while you are living, including a three-dimensional scan of your face and videos of your body movements, as well as a speech that you want the robot to deliver on your behalf. All of about 80 people who have compiled such data about themselves for the use of a digital shaman are still living. But, just imagining how the digital shaman would let you communicate with your loved ones beyond the grave can make you emotional. Ichihara said she often sees impressionable high school girls having deep thoughts in front of the digital shaman at exhibitions. Some of them have somewhat fearful looks on their faces, she said.

As mentioned earlier, all the data about the deceased will be erased after 49 days. Ichihara deliberately designed it that way.

“If you can bring back the deceased at any time, forever, that would mean you are living in a dystopia,” Ichihara said. “I think the 49-day period is created for a purpose; it helps the survivors move on in a healthy manner. It wouldn’t be a good idea to make them cling onto the memory of the deceased. At the end of the day, they must face and accept the fact that the person has passed.”

The digital shaman may evoke an image of a futuristic world in which people have the power to bring back their loved ones from the dead and live together happily ever after. But Ichihara created the digital shaman to help people live their lives, and not to make them dream a dream. Perhaps, this is what earned the digital shaman the Entertainment Award in the Japan Media Arts Festival, an annual festival held by Japan’s Agency for Cultural Affairs, this year. The digital shaman also received an honorary mention in the Festival’s Interactive Art category.

Ichihara experimented with the idea to have the Digital Shaman create a speech for the deceased and deliver it in a digitally synthesized voice. “I felt that goes a bit too far ethically,” she said.

Following the development of the digital shaman, Ichihara said, she became more drawn to life’s energy, possibly to counteract the effect of staring at death. It was during this period when she came across French photographer Charles Fréger’s photo book, “YOKAI NO SHIMA.” The book features his photos of traditional masks, costumes and other Japanese cultural objects from across the country that represent the gods and ogres that people used to believe reside in nature. Fréger’s photos of “namahage,” particularly left a strong impression on Ichihara. “Namahage” is an end-of-the-year ritual in the northeastern region of Japan, in which men wearing masks visit from house to house (while local families are making straw ornaments for the new year), asking them, “Is there any kid behaving badly?” The ritual can be traced back to the belief that there is a god who visits you to give you blessings. Some people see a parallel between this and the Santa Clause tradition.

Ichihara liked the namahage photos so much that she began visiting City Hall in Oshika City, where the namahage tradition is alive and well, to gather the oral history of the ritual. Her research would reveal that namahage had a practical purpose; by having men visit from house to house, the community leaders were able to keep track of household changes and people’s whereabouts and help maintain the city’s safety, among other purposes.

In 2017, Ichihara released, “Toshi no Namahage (Namahage in Tokyo),” an artwork that combines videos and costumes. It’s a story of how namahage might work in Japan’s modern metropolis.

Ichihara is now producing the “Virtual Currency Hounoh Festival.” (The Japanese word, “hounoh,” can be loosely translated as “dedication.” In the old days, farmers held hounou festivals in which they dedicated some of their harvest to thank God for the crops. Many of these festivals feature parades in which a group of people carry together a miniature shrine called “mikoshi” on their shoulders.) The Virtual Currency Hounoh Festival is scheduled to be held in the shopping district in Tokyo’s Nakano Ward on Nov. 10-11, 2019, featuring a “mikoshi” with a computer server installed in it. The server is designed to digitally accept cryptocurrencies from all over the world. Every time cryptocurrency comes in, the LED light-covered blades of the server’s fan shine and spin, while the mikoshi blares a prayer of the person dedicating the cryptocurrency in a digitally synthesized voice. We heard that Ichihara also has a scheme up her sleeve to surprise people with some sort of “physical manifestations” of those prayers. In addition, we’ve been told that she is taking advantage of biotechnology to create a “goshintai,” or an object that houses spirits, reflecting the tradition of using plants and stones, in which people believed spirits resided, as “goshintai.”

Ichihara is moving on from death to life, and to the celebration of life. But, she’s still chasing the essence of Japan-ness in our culture and customs.