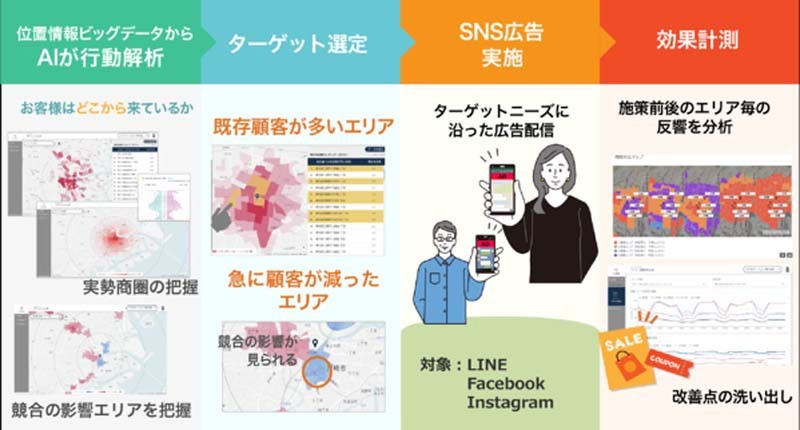 On July 14, X-Locations launched the new service "XL Location-based Advertising" on its location-information big data utilization platform. At the same time, it has raised 220 million yen (around $2.05 million) from venture funds.

X-Locations develops and operates the "Location AI Platform (LAP)," a platform based on the company's proprietary technology that analyzes and visualizes location-information big data through the use of AI. XL Location-based Advertising facilitates the effective dissemination of advertisements on social media platforms based on analyzing location-information big data. In addition to the online dissemination of advertisements to smartphone apps that have been provided to companies using LAP, the advertisements can also be disseminated on social media platforms (LINE, Facebook, and Instagram) which are intertwined with the lives of many users, thus maximizing their reach.

In addition to targeting based on user profiles on social media, the results from analyzing location-information big data extracted from LAP can be utilized in tandem with the actual behavioral patterns of consumers to configure more precise settings for target users. Possible targets of advertisements include not only the (estimated) residential areas of particular customers, but even individuals who are projected to have visited the store on the previous day.

LAP itself has also undergone a massive overhaul, with various features such as LAP's location-information big data analysis features "crowd monitoring" and "trade area analysis" transformed into widgets. These widgets can be freely combined into a single user interface on the newly released "LAP dashboard" to allow for easy access and use.

Also announced at the same time were the results of the company's financing, which had been conducted via the third-party allotment of shares with the Tokyo University of Science venture fund as an underwriter. The funds raised will be used to facilitate the development of LAP version upgrades, improve the location-information data analysis technology "Location Engine," and to promote higher utilization rates in the market.